Where The Rainbow Fell Down 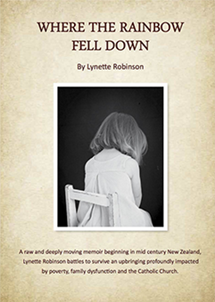 Preview the book on Amazon
“This gripping memoir set in mid-century New Zealand is inspirational and deeply thought provoking.” ~ The Daily Post
“Lynette Robinson’s New Zealand memoir is a tear-jerker, there’s no doubt about that.”

“Her life’s journey is a rich and rewarding read.” ~ The Nelson Mail
“A harrowing tale of adversity and triumph.” ~ The Southland Times

or order the Paperback 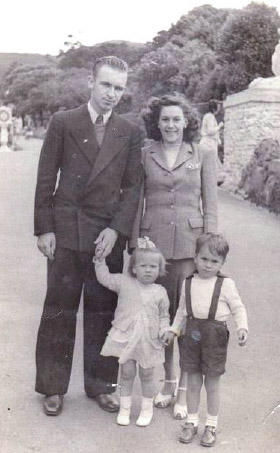 Set in mid-century New Zealand, Robinson takes the reader on a spellbinding journey back to post-war New Zealand and beyond. She then brings us forward as she shares our nation’s triumphs and tragedies – alongside her own personal ones.

Robinson was tormented by the four deadly fears she inherited from her mother – God, the Devil, her Father and the Catholic Church. Although a feisty child with a dazzling measure of determination, this did not save her from coercion into marriage to an older man when she was a teenager. Years of marital unhappiness follow.

The second half of the memoir tells the story of the Catholic Priest Robinson fell in love with. Easily coerced into the priesthood at a young age, the expectation to put catholic dogma ahead of human needs is an ongoing struggle for him. He then meets Robinson and his love for her sets him on a collision course with the church.

Where the Rainbow Fell Down is a powerful memoir that will have you both laughing and crying. With a refreshing absence of the self-pity genre, it is a riveting and inspiring read.